Guess who is back with another post? Its me!

This time I thought I would change it up a little bit and show you all something else that I have gotten to experience by listening to the music that I listen to, friendship! I have made three of my best friends through this music and concerts and I would like to take some time to show them how important they are to me and show what music can do to bring people together.

Nadia: Nadia and I started talking on twitter around October of 2015. She introduced me to someone else going to a show that I was going to and after that we became super close. Then the following year, I was going to see Bring Me The Horizon on Nadia’s birthday in may and we were so excited to meet and then I ended up not being able to go. Nadia and I finally met at the Pierce The Veil concert in June and it was amazing. The whole day I had been texting her back and forth about when she would be at the venue and what she was wearing so I would know what to look for and texting her while she was on her way and asking how far off she was and I am sure I was getting entirely too annoying. Both of us had VIP and the VIP person had come out and started handing out lanyards, and still no sign of Nadia. I had called her and she had told me she was walking up the line now and the second we saw each other we dropped the phones, squealed and I don’t think I have ever been hugged harder in my life. We spent the time between sets talking and stood together during the show, and then after the show said our goodbyes. We still talk pretty much every day and she is definitely a best friend of mine. Nadia has helped me through a lot of troubling times and events in my life where I didn’t feel that I had anyone to talk to. I certainly do not know where I would be without her and I don’t think we would have met without the music we listen to! And now we are seeing Bring Me The Horizon together on March 28, Mayday Parade on April 23, meeting and seeing All Time Low together on July 15, and going to Warped Tour together on July 27. 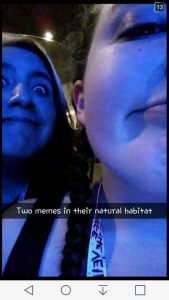 Hannah: I started talking to Hannah early in 2016 when she found out I was going to the Milwaukee, WI date of warped tour. From then on we talked pretty regularly and became great friends. When I went up to Wisconsin from my home state of Kansas, my friend and I had forgotten to bring some things and we went to a store to pick them up, it was then from a snapchat that I took that Hannah noticed how close my uncle, who I was staying with on this vacation, lived to her. We immediately set up plans to meet for ice cream that night and my friend and I went back home and got ready to go meet her. When her dad pulled up and she got out of the car her face was so bright and happy, honestly I felt famous! We stayed and talked for a while before she had to go back home for the night. It was so awesome meeting up with her and getting to know her a little bit, and then getting to hangout with her and Dalton (Dalton gets his recognition next!) a little at warped, I especially loved the moments where I would be in line to meet a band and her and Dalton would run by and wave before going and seeing another band, and then get to see a movie with them a couple of days later before I went home. Hannah is truly one of the sweetest people I have ever met and I am so happy that her and I became friends!

Dalton: And last but certainly not least, is my precious Dalton. If you were to look up the definition of a caring, sweet, funny, all around great guy, you would find a picture of Dalton. The night that I met up with Hannah I got a snapchat from her after she went home telling me that Dalton was jealous that he didn’t get to meet up with me that night too. I of course reassured him I would see him in a couple of days and that it would be great. When I got to the warped venue I saw Dalton, Hannah, and their friends in line and a smaller band stopped me before I could go hug them. After paying the money for the bands ep (which I sadly never listened to, whoops) I rushed to the group and made sure I hugged Dalton extremely tight. He also seemed incredibly happy to see me, which made me feel amazing. Later that week a day or so before I went home, my friend and I met up with him and Hannah to see a movie before I went home. He, Hannah, and I hugged quickly before I left the theater and I will be completely honest it was hard to fight the tears because I had so much fun hanging out with these guys and I knew I had to leave them in a couple days. But even after I left they both made sure to keep contact and even though I miss them terribly I know we will reunite soon!

So, the point of this post? To show the outside impact music has on people and the evidence that it brings people together physically. I love these three so much and I don’t know what I would do without their friendship. They are such great people to be around and to talk to and I am incredibly fortunate to have them in my life. Just as I am thankful to them for being my friends, I am thankful for the music, and the artists, that brought us together in the first place.